HomeReviewsWhat next for the Switch?
Reviews

What next for the Switch?

There is no denying that the Switch has had a strong launch and the lineup of games coming for the rest of the year is again very strong.

There are plenty of games announced for next year as well, and from the system still being out of stock in a lot of places (here in the UK) is there going to be enough stock to cover the holidays? Nintendo did say that they were trying to up production from August to try and make sure that the backlog of people who were after one managed to get one and that they would have enough for the Holidays. However, at the moment I can see there being a shortage at Christmas and that we may have a Wii situation on our hands. Intentional or not from Nintendo, it’s going to keep the flow of systems running for a long time, which means software sales keeping up as well, hence the reason why games like Zelda, Mario Kart 8D etc keep up to the £40/45 mark all the time. A steady flow of sales and plenty of people still wanting to buy.

The question to ask ourselves now is, what is next for the Switch? There are a steady amount of games being released and more and more being announced on a weekly basis with more and more developers getting on board the Switch hype train.

However, it’s no secret that when it comes to other features that the system is a little threadbare. There isn’t an internet browser, no apps are on the system currently and nothing new has been added since launch, just general stability updates that are being released quite sparingly.

But my questions are, where are the apps or other features coming from? When are they coming? What’s the deal with Virtual Console? Is that going to come along when the paid online system kicks in? Is this going to be the same for most of the new features?

There are a few tweaks that I would like to see added to the Nintendo Switch, the first of which being the homepage. When you get 12 items on the homepage, there comes an icon at the end that says ‘All Software’.

When you press this little button, it takes you to a page which displays all your games in a full page grid as displayed below:

My thought to this was, why can’t this be the homepage and make it scrollable? Why are we restricted to just the one row of 12? Surely it would be more productive to have them all on the screen and make that scrollable? It would also make it quicker to find the game that you want as you wouldn’t have to scroll to the end, click the ‘All Software’ button, wait for the page to load and then potentially scroll some more to find it.

This can also be adjusted as well so that maybe folders can be implemented, so you can put Cartridge games in one, digital in another, or one for games, and when they’re released another for apps. There could also be the option like they have for Xbox pins to be able to move the games about so you can keep your favourites at the top. Lots of ideas possible for this, and some that I hope get implemented.

My beef with this is that why can’t this be placed on the homepage? So, say you’re changing games, and want to know how the new game is affecting your Joy Cons battery life, all you would need to do here is press the homepage button and voila, there is it. You can then go back to the game as quick as you got to the homepage. All good.

Another improvement I would like to see made is to the capture feature. I’m not going to mention video recording as Nintendo has said that this is coming to the system. What I would like to see improving is how captures are shared. Currently, once you’ve taken a screenshot, you have to go back to the homepage, to the album, select the screenshot you want to upload and then do it.

Why can’t this be improved? Made a lot quicker so that it can be done in-game? Keep the one press for saving screenshots, but why not have a hold down or double press feature which takes, and saves the screenshot and opens up a window to upload it to whichever outlet you would like?

That would make things a lot simpler when wanting to share a screenshot straight away, because if you’re like me and carry on playing and say ‘Ah, I’ll do it later’ – You’re bound to forget after a few hours of playing and it goes lost of days and maybe weeks if you don’t check your album.

Next, I’m going to talk about the friend’s list and adding friends. I came back to 30+ friend requests one day on my Switch and I had to go through each of these individually. My question here is why? Why do you have to do this one by one?

Why can I not select the friends I want in a mass batch and click an add or approve friend button? It gets a bit of a pain when you have to do it one by one, especially when I found that the pages don’t load that quickly either. 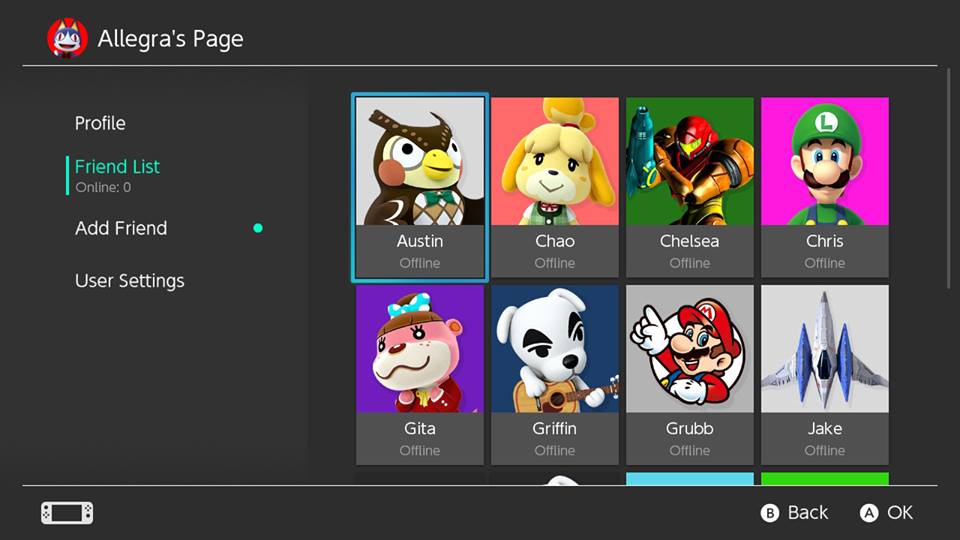 The games are coming to the system, and I’m hoping that apps will become available sometime soon. As mentioned above there are tweaks and improvements that can help the system be a lot quicker and easier to use.

Fingers crossed we get to see these improvements made or something along those lines. Is there anything else that you would like to see improved on the Nintendo Switch is terms of the UI or anything that could make it faster?

*Images are copyright of respected owners.